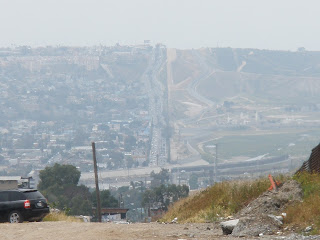 The U.S.-Mexican border winds its way through Borderlands/La Frontera, a sort of auto-history, in which she “puts history through a sieve, winnows out the lies,” (104). In winnowing out the lies, Anzalúa, establishes Aztlán as ancestoral homeland, reclaims powerful females in history, reinstates the creative power of female gods, pushes the mestiza towards a new consciousness and sets out the potential for  a new culture. This new culture comes by way of balancing cultural dualities (male/female, Spanish/English, Mexican/white/Indian, rational/intuitive) through—not the uneasy juxtaposition of two parts—but a powerful synthesis of cultures into something whole and new. To Anzaldúa’s thinking, the conflicting dualities of Mexican-U.S. border culture creates an unhealed wound across the land, an open wound replicated in the psyche of the people who live on or are affected by the geo-political border: Chicanos.
Anzaldúa makes the case that being constantly tugged at by opposing cultures and principles, by living straddling the border, understanding both sides, but never knowing which one to choose, is the psychic equivalent of the rift that is the border, the un-natural divide forged through war, sustained by violence and subterfuge, continued through the “constant state of mental nepantilism” (100), the divide that occurs when people are caught between ways of being.
At the heart of Borderlands/ La Frontera, Anzaldúa looks to mend these rifts, “the agony of inadequacy” (67) that plagues the Chicano community and the individuals that make it up. She isolates and then deals with each aspect of Chicano culture that affects the feelings of inadequacy in each chapter in the prose section of Borderlands.. In drawing out the many contradictions within Chicano culture, and then resituating them, Anzaldúa sets up the potential for the new mestiza consciousness that she is after.
Ambiguity and duality are central characteristics of borderland culture, as conflicting cultural expectations, norms and languages pull at people in opposing directions, causing physic rifts.  Anzaldúa proposes synthesis for healing these rifts, a melding of two wholes into something entirely new and integral. Within Borderlands/ La Frontera, Anzaldúa employs many of the characteristics of borderland rifts—ambiguity, duality, and contradictions of language—in her writing, to create the essence of the borderlands and prove the possibility of her argument: that opposing sides of a border can seamlessly synthesize into something else entirely.
Posted by Michelle Marie at 12:41 PM