Oscar Ortega is currently working on a series of sculptures that will stretch along the length of the border, each one documenting the time and place of its site. The energetic and affable artist began this series with La esquina de un mundo (The Corner of a World) in Las Playas, the most northwestern corner of Tijuana and “the last, or first, depending on your view, corner of Latin America.” 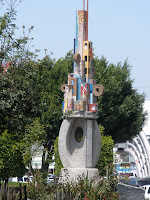 The next sculpture in the series, Entre ventana y puerto (Between a window and a door), sits on a meridian in the center of the main thorough fare out of Tijuana and into San Ysidro, about 100 feet from the border crossing. Here, there is always traffic, and men and women walk among the cars, peddling food and drink, puppies and piñatas, magazines, jewelry, entertainment by way of juggling and acrobatics, anything that could turn a dollar. 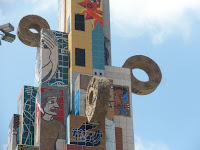 With Entre ventana y puerto, Ortega combined many elements of the border: the industrial aspects, the motion, the traffic, the cultures coming together, so the sculpture has elements of Aztec and U.S. culture, suns and stars and stripes; cement tire wheels jutting out from the edges.

Ortega took me to view the site of his newest work, in Otay Mesa, the industrial center of Tijuana. When we went, all there was was a deep hole, with a rebar structure that would help to stabilize the cement base once it was poured. The area seemed desolate, with abandoned big rigs and windowless industrial buildings set on massive plots of land, though we were just a few minutes away from the chaos of Tijuana.
The base of this sculpture will mimic a large cog and wheel, but Ortega will mosaic symbols – letters, numbers but also the ubiquitous symbols of today; the circle with a line through it that is now always on the “on-off” button on electronics – and will boast a cityscape at the top, with a mosaic of people in buildings, office buildings and maquiladoras, showing the variety of positions that people hold.
As Ortega works his way across the border, each of his sculptures will represent the specific area that it resides in. In the end, Ortega will have captured the characteristics of a specific time for each place through his work.
Posted by Michelle Marie at 4:19 PM No comments: