The Border Film Project, organized by Brett Huneycutt, Victoria Criado and Rudy Adler, three Southwesterners obsessed with border issues and the problem of portraying the border in a new light, passed out disposable cameras to migrants on the Mexican side and minute men on the U.S. side. They then took the photos from the cameras they recieved back and created slide shows on their website, borderfilmproject.com.

Though the three began the project in 2005, the collection of images remain quite relevant today. As the economy remains unstable, and migrants continue to pass over, Americans continue to fret about the effect of illegals on job opportunities. The escalating drug wars, fought largely on the Mexican side, raise concerns of violence following migrants over the border. Increased border control in California and Texas has changed the stakes of migrating across, diverting foot traffic around and through the more trecherous terrain of Arizona/Sonora desert region.

The Broder Film Project provides a intimate perspective of both Minute Men and migrants, personalizing hotly debated topics. The cameras came in from many different journies and experiences that had nothing to do with each other, and the array of images resist order. Each photograph provides a glimpse into the transitory life across--a picture of brutally bruised and blistered feet, say, or of several people resting in the underbrush. What is striking is how very little migrants carry across, and how: in bags tied with twine, fastened across shoulders with ropes, or in small day packs. They carry so little with them, crossing makeshift bridges and rickety trestles, pushing through the thick brush at night, rolling under barbed wire fences and waiting along the bleak side of the road, that it become undeniably apparent that they carry more hope than anything else with them.

The terrain figures highly in each set of photographs, fitting, as the geography determines these peoples' lives. The land is rugged, and even in the minimal abilities of disposable cameras, the broad expanse of wild land is clear. The violent beauty of the land and sky come through in both sets of photos, giving a dramatic backdrop against which the border drama plays out.

The minute men's photos are stationary in comparassion to the migrants. The photos show established posts, whether seated beneath trees, being a look out from a high boulder, makeshift outposts, or along the side of the road, they are waiting for the migrants to come through.

The Project's beauty lies in the simplicity of photographs, illustrating the unimaginable daily life of people along the border so lending an intimacy to a debate that is more often than not about numbers, not people.

--Michelle
Posted by Michelle Marie at 5:39 PM No comments:

Art to bring about change

Lourdes Portillo recently came to at Galeria de la Raza in San Francisco to discuss the power of art, her creative process and her experiences in Ciudad Juarez, Chihuahua, MX.

Portillo, a writer, director, producer, began her journey to making Senorita Extraviada (Missing Young Woman) when she came across an article about murdered women in Juarez over 20 years ago. She was struck by how the women were "stabbed casually and dismissed readily." Having spent time in Juarez, the tragic situation captured her attention: how is it, she asks, that women can disappear and no one knows to where?

She went as a documentarian to begin investigating making a film, which became a long and harrowing experience because, as she says, "It is difficult to make art out of tragedy, because you can't make representational film because people don't want to see dead bodies. They don't want to see the horror of it, so I made a lyrical film so people can feel it, and dream."

In order to choose elements of the film, Lourdes "understood that people didn't know, that there was no solution nor blame, but there were many givens. I knew that I needed to do a film where the audience would need to rest, to digest the product. Film is a powerful medium; I need to be careful with how I presented it--people can't stand horror.

"My idea was to evoke a passion so that you will act; that you will go forward and make change...that you will open your heart to bring about a little bit of change. At least, at the very least, awareness." 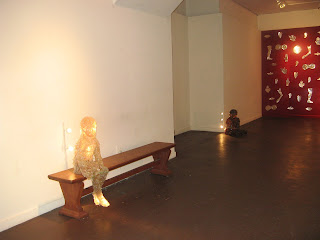 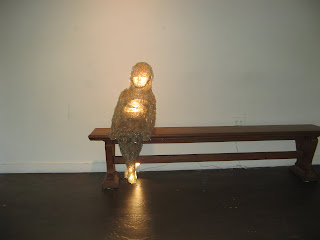 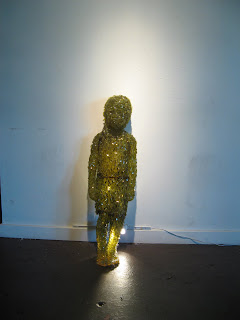 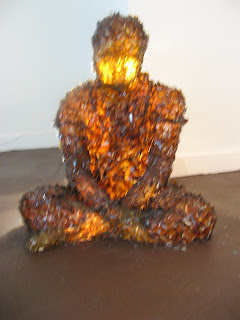 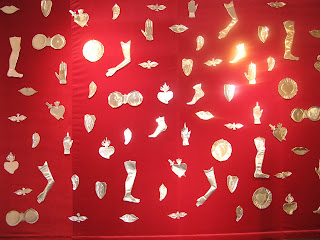 Ana Teresa Fernadez recently exhibited Ecdisis at Galeria de la Raza in San Francisco's Mission District. Ecdisis was an overwhelmingly forlorn exhibition; the gallery space was largely left open, and the walls, bare, except for one, which she covered in lush red velvet and then hung with milagros (literally, miracles, but milagro also refers to charm-like offerings to a particular saint to keep the petitioner's need in mind) all over it.

Fernandez began Ecdisis to respond to the murders and continued disappearances of the women of Ciudad Juarez, the border town that sits opposite El Paso, Texas, in the Mexican state of Chihuahua. After spending time in Juarez, Fernandez wanted not to replicate the continuing atrocities there, but to create something alluring. For her subject, she chose the orphans left behind.

Fernandez worked with orphaned girls both in San Francsico and Juarez to create her exhibition. She first made plaster casts of their bodies from which she made a mold to cast the final resin form of the sculptures. While the resin was still soft, Fernandez she pressed broken glass into the forms of the girls, delineating the fall of hair and folds of their clothes. She chose to use broken glass because she wanted to use something from the urban environment from where these girls come from, where broken glass lines the streets. "I let the terrain influence my work. There is a beauty and preciousness of glass but it is untouchable...I wanted to give the girls protection," Fernandez said.

The resulting figures are untouchable, but less from the sharp edges of the broken glass than the ethereal quality given them by the backlighting that light up their little bodies and reflect off the shards of glass. Fernandez situated the glowing figures around the gallery so that each seemed very much alone. In the end, the figures seem like the loneliest angelitas ever.

--Michelle
Posted by Michelle Marie at 2:13 PM No comments: