In jumping fences, Colo brings out the dualities of borders and fences. Fences are ubiquitous, whether in rural or urban locations, to the point that we hardly think on them. In Jumping the Fences, though, the nature of them becomes clear, that they keep out and keep in; protect and isolate; divide and unify. Jumping a fence is a transgression, one made all the more clear by Colo, who masks himself in each of his jumps. With his face hidden, he becomes anonymous, one of any number of people who don´t belong climbing over a fence, who, by doing so, undermines why the fence is there: the mark off property, to keep people out according to the discretion of the owner.

Even though each photo captures essentially the same image: a masked man climbing over a fence, the images are all drastically different in lighting, background, setting. They capture different phases of climbing and jumping, from hoisting himself up, hauling himself over, to jumping off, vaulting over, climbing up or descending. The foist is the same, each works to undermine the point of these fences, subverting their authority to say, ¨keep out.¨

In each image, from a myriad of locations around the world, the fence or wall is always angular, a rectangular form in contrast to which Colo´s body bends and morphs from one position to another. The malleable, movable body over the inertia of the walls revels in its empowerment in these photographs. There is not much the walls can do to stop anyone from climbing them.

This empowerment is exactly what Colo catches in the poetry paired with the images and action of jumping fences. It is not poetry that clamors to get over or despairs at being locked down on one side, but is full of possibility, and the discovery of freedom and potential in himself.

Colo´s project had him jumping fences around the world, passing through borders and always unlimiting himself by penetrating boundaries and his poetry reflects the potential imbued in movement and transgression: ¨me and my body jumping/inside any freedom possible¨(Feb 07). Colo surmounts staid impossibility with the possibility of movement.

Posted by Michelle Marie at 5:35 PM No comments: 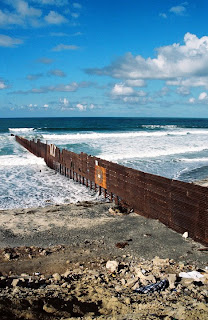 In Cerca de la Cerca, the border fence that divides Mexico and the United States is at the center. Maria Teresa Fernandez, a Mexican photographer now living in San Diego, photographed the fence over. Through her work, the function of the fence in people's lives becomes clear: its a obstacle to overcome to those for whom the American Dream pulls at; an ever more fortified barrier to stanch the flow of people coming in; a divider of people.

At UCSC, Cerca de la Cerca exhibition covers the walls of two rooms. Fernandez has been careful to capture all aspects of the fence, and organized the exhibition accordingly.

The first groupings of untitled photographs capture the fence alone: first as a long corroded metal fence that extends into the Pacific ocean, a close up of the corrosion of the fence and through a hole in it, a landscape of San Diego to the other side, and then a series of images in which it is unclear from which side we look over or through or at the fence from, but in each, the texture and colors of metal striping away are tangible.

With the introduction of heightened surveillance to reduce border crossings with Operation Gatekeeper in 1994, migrants have been forced to cross the border through the harsh desert to the east and many more people die in their attempt. In response, along the Mexican side of the border fence, alters crop up like nightmarish blooms. The alters are made in the tradition of Dia de los Muertos alters, yet these are replenished year round. They yearn for the missing and gone, or list the dead found and never identified, they commemorate those who have died and seem to beg the fence itself for relief. In these alters, the struggle, the tragedy, the hope and desperation and powerlessness literally hang off the fence in alters colored like celebration. These photographs explode with brilliant colors and are full of roses, marigolds, giant tissue paper flowers and wreaths.

Murals intersperse the alters along the southern side of the border fence. This art encourages people across, with statements like, "Bienvenidos al sueno americana" or painted silhouettes of men climbing over, even while others make a clear statement to the death threat the new wall is to those who would cross over. Painted blood seeps across a landscape in one mural; in another, Death stands at a gate between the US and Mexico.

It appears that people live right up alongside the border fence in Mexico: it is a barrier to turn into a weeping wall, a protest wall, a wall to hang your hopes and anger and desperation on, yes, but Fernandez has also presented images of trash blown up in piles along the wall and towns that abruptly stop in the presence of the wall. The collection of images from the Mexican side of the border reveal a vitality that is hemmed in only physically by the fence.

In contrast, the images of the U.S. side of the border fence are spare. Urban development can be seen in the distance, but they stop well north of the fence. The hilly, arid terrain stops shy of the second barrier fence by a dirt road that runs along the fence. In one photograph, the double fence, outfitted with spotlights and lookout towers, seem to race along the curving landscape.

After establishing the lay of the land, Fernandez introduces the people that live on and near the border and reveals the delicate nature of the relationships that often straddle the border. Before Friendship Park (in San Diego, a point where people could visit across the border fence) was closed down, Fernandez photographed a series of meetings. In one, family and friends picnic, but they sit separated by the fence, and talk through slats. In another, a father and daughter visit their family, who are obscured by the fence. People kiss, children are lifted through, adults reach their hands through to touch the people on the other side. In this series, the sacrifices that people make to cross the border reveal the intensity of the desire to try and make a better life.

Against this, Fernandez posits the U.S. Military personnel patrolling the border. The men are completely outfited with goggles, helmets vests and guns as they work to shore up the permeability of the fence. At work, these men give U.S. policy an unforgiving and inflexible face, especially when the next grouping of images are of people climbing over the fence. One man uses and alter as a ladder and carries little else but the ragged shirt and pants he wears. He is no threat to the Border Patrol.

With Cerca de la Cerca, Fernandez highlights the permeability and mortality of the fence by focusing on the corroded holes and barnacles growing on it and then mirroring this disintegration in the photographs of Mexican murals depicting men tearing down the fence. She creates compassion and humanity on the Mexican side of the fence, while making out the US side to be desolate, a effect heightened by the brilliant colors of the fence art against the drab military colors of both the uniforms and land of the US. 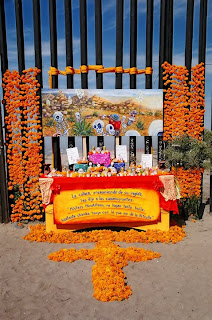 Posted by Michelle Marie at 10:47 AM No comments:

Alejendro Murgia is a master storyteller. An invited speaker at May´s Lunada, Murgia hid out in a far corner of the galeria until he was called onstage.

He walked to the front carrying stacks of papers and a thick book, then put them down, saying, "But I´m not going to do that; I'm going to see what's in the jukebox," meaning, see what bubbles up in his memory.

He kept his audience completely enchanted and engaged throughout his performance by staying unpredictable--following a war story with love poetry, singing verses or adding a percusive beat to his poetry. It shouldn't be suprising how easily Murguia captivated his audience--from teaching Raza studies at SF State, he has a committed following, and the audience was filled with many of his students. Murguia has a rich history from which to draw from as well. California born and Mexico City raised, the chicano writer helped define the begining of the Chicano movement in the 1970s. He volunteered during the Nicaraguan Revolution in 1979 and was a founder and original director of the Mission Cultural Center for Latino Arts. Through it all, he has been writing, so you see, when he says, lets see what's in the jukebox, there's a lot there to be pulled up.

Murguia began by recounting the time he spent two days hiking to Che Guevara's camp and of the huge fogata he and his friends had the night the he saw Che's desk, a moment that inspired the first poem he shared with us, "There is no Santo on my alter." In a deep, rough voice, Murguia told his poem as if in conversation with Guevara himself, says that Guevara was "right about love and revolution/ and wrong about everything else." The power of Murguia's spoken poetry is that he doesn't recite; he tells it fresh, as if the poem at that instant of telling, welled up from some deep spring within him. With "Tango Roto," Murguia added percusive beats in, using his heels, clicking his tongue, blending the sounds into his lyrical tale to give it dimension.

Recently, Murguia re-encountered Mexican postcards from the 1920s, and is working on two new works, The Violent Lense: Photo Postcards of the Mexican Revolution and A Little Bit of Mexico: A Story Told in Postcards. He brought some postcards with him to La Galeria and shared them with us, and how postcards hold a bit of history.

At times he threw the minibooks (two inch squares containing a single poem each) out into the audience and finished off with a reading from one of them, "16th and Valencia:"

I saw Jack Michelie reciting Skinny Dynamite
on the corner of 16th / Valencia
and he was angry
and the next day he was dead on the last BART train to Concord
and maybe that´s why he was angry
I met Harold Norse shuffling around in a beaten world
his pockets stuffed with poems only hipsters read
It´s a cesspool out here he sighed
before retreating to hi room in the Albion Hotel
where angels honeycomb the walls with dreams
and the rent is paid with angry poems
I heard Oscar Zeta Acosta´s brown buffalo footsteps
pounding the Valencia Corridor
and he was shouting poetry at the sick junkies
nodding with their wasted whores
in the lobby of the Hotel Royan ¨The Mission´s finest¨
and even the furniture was angry
I joined the waiters at the bus stop
the waitresses the norteños trios the flowers sellers
the blind guitarist wailing boleros at a purple sky
the shirtless vagrant vagabond ranting at a parking meter
the spray paint visionary setting fire to the word
and I knew this was the last call
We were tired of livign from the scraps of others
We were tired of dying for our own chunk of nothing
And I saw this barrio as a Freight train
a crazy Mexican bus careening out of control
a mutiny aboard a battleship
and every porthole filled with angrer
And we were going to stay angry
And we were not leavign
Not ever leaving
El corazon del corazon de La Mision
El Camino Real ends here
-Alejandro Murguia
Posted by Michelle Marie at 10:45 AM No comments: