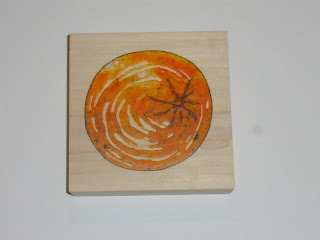 I saw the second MexiCali Biennial at La Casa del Tunel in Tijuana. The Biennial includes artists from both sides of the US-Mexican border and aims to create a cross-border dialogue that replicates the fluidity of culture in the border region of southern California and northern Mexico.

This biennial set forth the theme of economics of exchange that underlie all border interactions for the artists to explore. The art works created approach the idea in a variety of ways, some, like, Ryan Lamb's Subsistance Plan for Starving Artists, take it quite literally.

Lamb tongue in cheek installation piece maps out literal transactions alongside the I5. The wall where his piece is, sports a series of small square pieces of wood, each with a painting of an orange on it. A mesh bag hangs from the ceiling, filled with the small paintings and a sign on the wall gives directions for artists to go from buying a bag of oranges on the freeway (sold by immigrants), painting of each orange, to selling each painting for the cost of the bag of oranges. In this piece, Lamb links immigrant labor and artists, noting that neither easily survive in this world.

Ernesto Rosas' documentary, Skateboarder, also looks at literal border exchanges in his interviews of Mexican skateboarders who have immigrated to the US or Canada in the hopes of making their sport their livelihood. Rosas films in Mexico and in California, documenting the dreams of these skateboarders and all the barriers they face. The film jumps back and forth between skaters, between interviews and shots of their skating skills.

The compassionately rendered documentary examines the relationship between the passion these skaters have for their sport and the reality of making a living from it. Though one skater describes skating as a movement art, these skaters have to struggle to make it in any way at all. Rosas also shows the uneven relationship between the U.S. and Mexico through skating: the money and support for the sport is in the U.S., but the skaters don't want to have to leave Mexico to follow their dreams. Some return, and others don't, but at the end of the film, I hoped that some of these skaters would be the forerunners of a successful skating scene in Mexcio.

Pablo H. Cobian drew out a manual, Manual de Como Quemar un Billeto, or, how to burn a bill. In simple pencil outlines, he depicts two hands taking out a bill, holding it, holding a flame to it, then burning it, and the final framed piece is a shriveled, burnt bill.

Michelle Chong made a website, Find Yourself Here, that slideshows through beautiful landscapes--the desert, a forest, mountain scene, waterfalls and beaches--and then stamped phrases across them, borrowed in the language of tourist pamphlets, like "Funville," "Spa Atmosphere," "Be a Local," making the landscapes a commodity. Find Yourself Here reflects the common attitude that Americans have of Mexico, associating it with vacation, beaches and beautiful resorts. For tourism, it is a land for sale.

All of these pieces play with the back and forth movement across the borders, making the border seem insignificant against the fluidity of movement of people, culture, economy.
--Michelle
Posted by Michelle Marie at 7:42 PM